It’s the oldest shrine in Oki. The main shrine (important cultural property) was built in a unique architectural style called Okizukuri. Moreover, don’t miss the large cedar tree on the grounds, Yaosugi, which is a 1,000- to 2,000-year-old natural monument.

It’s difficult for wheelchair users to move around, because there are bumps and gravel paths and the bathrooms are Japanese style only, but it’s a magnificent shrine worth to be seen. 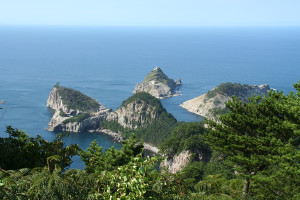 You can have a broad view of the horizon from the Shirashima observation platform. That proves the earth is round. From the sightseeing boat, the island having the lighthouse looks like a lying lion, so it’s called Lion Island (Okino Shima Island). You can go in a wheelchair up to the observation platform. 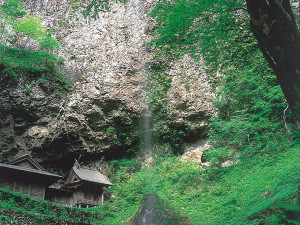 They are waterfalls in Nagu, Okinoshima-chō, which are called Dangyōno Taki. You can see the difference between the two kinds of waterfalls, on both sides of the Dangyō Shrine. They are selected among the 100 waterfalls of Japan. The spring waters of Dangyōno Taki are selected among the 100 waters of Japan. The locals use it to win in competitions. It’s possible to get close in a wheelchair. 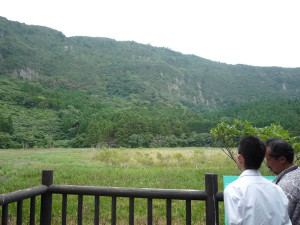