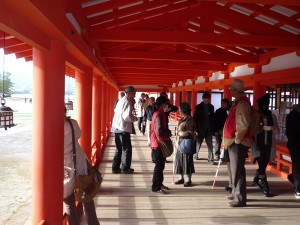 Itsukushima Shrine, the beautiful complex building floating on the sea, has been designated as a world heritage site. It’s about 10 minutes by ferry from the mainland to the Miyajima Island. Departing from the Miyajima pier, toward Itsukushima Shrine, there are various souvenir shops, coffee shops, and restaurants along the street. By eating food like momiji manjū cake and the famous grilled oyster on your walk, the good feeling of the visit even raises.

There’s a ramp at the entrance to Itsukushima Shrine and is easy to move in a wheelchair in the vivid vermilion corridor on the sea. However, there are gaps between the boards of the corridor. Therefore be careful not to drop things in the gaps. Inside the facility, accessible bathrooms are installed. 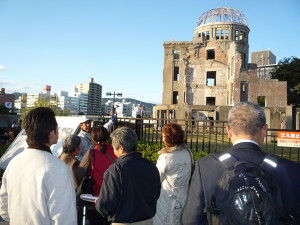 The Atomic Bomb Dome, which conveys the misery of the atomic bomb dropped on Hiroshima in 1945, has been designated as a world heritage site. The place is famous for the memorial ceremony and prayers for peace conducted by many people each year on August 6.
In the peace memorial park, which contains the Atomic Bomb Dome, public bathrooms and accessible bathrooms are installed at several places. There are some bumps but it’s easy to move even in a wheelchair.

In the Peace Memorial Museum within the park, items like victims’ belongings, photographs and other materials show how terrible the radiation effects are. Also on display is an introduction to Hiroshima’s history before and after the bombing. On some days, sign language volunteers are available. Prior contact about the schedule is necessary. 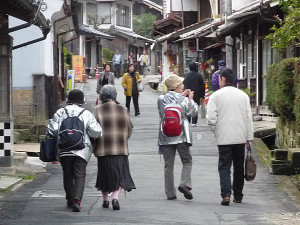 The world heritage site Iwami Ginzan was Japan’s largest silver mine in the years 1500-1700. At its peak, it produced one-third of the amount of silver in the world. The Iwami Ginzan ruins is scattered in several points. The Ōmori area and the Ginzan area are the center of the site. In the Ōmori area, there are many old houses lined along the street, raising some kind of nostalgic feelings.

The place is slightly hilly, and some parts are steep. Accessible bathrooms are available at several places in the area, including Ginzan Park. 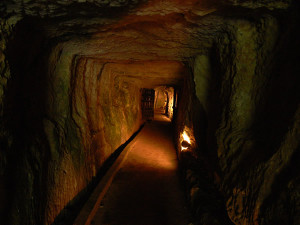 After passing through the Machinami Area, there are Ginza Park, the Tourism Information Center, and the base of Iwami Ginzan sightseeing guides. To go to the shafts from where the silver was extracted, there are long hills to go up. In the Ginzan area, ordinary vehicles cannot enter, but it’s possible with prior permission.

Ryūgenji Mabu is the only shaft open to the public. The surface is flat and of easy access for wheelchairs.