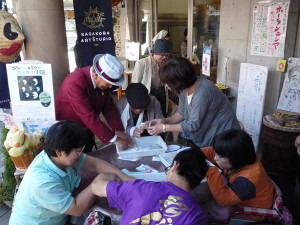 Karakoro Art Studio was remodeled from the former Matsue Branch, Bank of Japan. It’s a tourist facility for making, seeing, and tasting. There are many making experience activities, such as Japanese sweets, accessories, including the magatama jewel, which has been made from the ancient times in the Izumo area.

Magatama is made by shaving a white stone with sandpaper and making a piece as big as the tip of a finger curved at one end. Even people who cannot hold the stone can do it with the help of the shop staff.

In Karakoro Art Studio, there are 2 accessible bathrooms and an elevator. 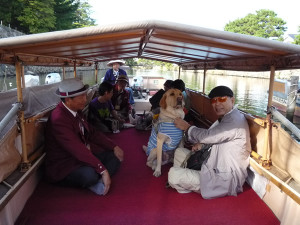 Among the tourist activities in Matsue, the Horikawa Sightseeing Boat, which cruises the moat around Matsue Castle in 50 minutes, is the first or second most popular. Many wheelchair users take it, so the staff is familiar with giving assistance to them.

It’s about 5 minutes on foot, on a well-made sidewalk, from Karakoro Art Studio to the boarding point.
There are stairs at some parts before the boarding point, but wheelchair users can get help from the staff.

The boats pass under more than 10 bridges. Among these, the bottom part of the bridge is low in 4 cases, so the roof of the boat has to be lowered down. Before departure, the operator will demonstrate to which extent the roof has to be lowered. For people who cannot hold in that position, assistance is desirable.
There’s a ramp up to the boarding point. 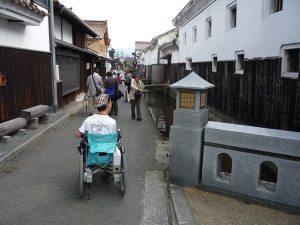 In Kurayoshi, strolling along the streets of white walls store houses is recommended. You can’t miss the famous dish “mochishabu,” either. It’s thinly sliced mochi soaked into a soup and then wrapped around vegetables. After eating that, you will have a happy moment.

In this town, there’s a accessible bathroom that used to be one of 10 good bathrooms, so it’s convenient. 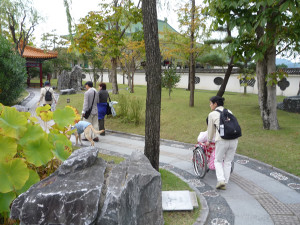 From the station, go to the Chinese style garden Enchōen using a welfare taxi. Enchōen was built as a symbol of friendship between Tottori prefecture and China’s Hebei province.

Part of the drama Saiyūki was filmed there. There are bumps at some points but moving around is possible without major problems. You can also enjoy yumcha at the stands in the gardens. 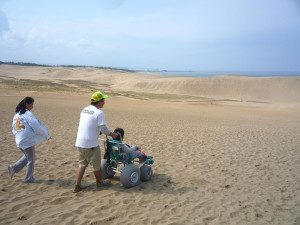 It takes about 20 minutes from Tottori Station, by the Dunes Line Bus (some are low floor buses) or by taxi. At the Sand Pal Tottori, located at the entrance to the dunes, dune buggies are always readied for people with mobility problems.

The biggest dune is called Umano Se (“Horseback”). Watching the Japan Sea from there makes you want to go beyond the sea.